Emily Elizabeth Dickinson wrote these few words in 1830. Four lines at all that can vibrate and are penetrating even today. “The high prerogative itself hath suffered too” can be defined this way the meeting with Dimitris Papaioannou. Choreographer, director, dancer, set designer, costume designer and visual artist, born in Athens, where he trained at the School of Fine Arts before perfecting his artistic research through a long stay in New York. He formed the Edafos Dance Theater in 1986 and for 17 years, until 2002, he crossed and put in contact physical theater, experimental dance and performance art, influencing the artistic scene in Greece. From 2006 on, he began to create avant-garde works and with “Since She / Seit Sie” he was the first artist to create for Tanztheater Wuppertal, the glorious company of Pina Bausch, in 2018, after her death.
During the interview, the “searching for the meaning in life”, as a human being, it emerges immediately. It goes through suffering, classical myths, the body, relationships and archetypal energies until it becomes a universal storytelling.
Finally, an exciting “privilege” was the meeting and the kind welcome received on an autumn afternoon, just before sharing thoughts and words, memories. Almost like bees do with pollen, moving from flower to flower, transforming the experience of a flight into honey.

What is the most intimate and universal question you have about life?
What is the meaning of it all?

Your being greek has influenced and influences your creative process. Which Greek deity you think you have among your ancestors?
I don’t know. I think I am split between the apollonian and the bacchic as most people are. I think I am torn between the body and spirit. I have two magnetic poles pulling me in. And also, my Greekness is something I realized after I started travelling with my work. This came very late, I was fifty years old. Since then, I’ve been extensively touring and I understood that my identity was evident. Something that I had not realized before. And it’s not only the game with my ancestors, but I think it has to do something with the light, with the fact that I was brought up, like Italians, on ruins. I also think that this kind of light, this kind of element, creates something that connects sensuality with spirituality. I think this is the very core of the Greek proposition for life, the Greek contribution to the whole world, specifically the western society. So, I am kind of discovering my Greekness moving forward and long as more and more people ask me about it. I didn’t know about it, I discovered it recently.

Generally, speaking about the concept of seduction, which side do you place on, from that of the god/demon Eros who “seduces and breaks the limbs of men and gods…” (Symposium, Plato) or on the side of those who are seduced?
From many years now, I think I’m standing by the point of the seducers and I think that it is also my wish. I love to seduce esthetically and emotionally the audience.

The ambivalence in being half god and half demon has ever intrigued or inspired you?
Yes, this is the issue of the shadow, the Jung’s concept of the shadow. When you accept it, you acknowledge it and you do not pretend to eliminate your shadow in your journey towards the light. My point of view as a painterit is also crucial because the more intense the light is, the darker the shadow. I think that the demonic and the angelic side of us are both part of the substance of life that we should never deny. I see these as the forces of life of human beings, the only creatures with consciousness on this planet that harness the raw energy of life and channel it towards watering one’s field. By taking this energy, the water flow of life, and then chanelling it. But denying it, putting a wall against the power of this water, it will definitetely leads to tragedy. So, I’ve been always intrigued in handling, dealing the light and darkness on equal portions. I think it is wise to say we humans believe that the evolution moves towards the light and I think this should be our direction. Ignoring our shadows, the darkness, our demonic nature nevertheless is disastrous. I will fail, as a human, all the time, again and again. Also, as an artist, of course. But in my thoughts I’m trying to embrace the demonic side.

The human body, often naked, always central to your work. Is it a cult, an obsession or what else?
I think the human body is central in everything that is named Dance or Dance Theatre, most definitely in the tradition of plastic arts too and I think generally because art is a human construction, a necessity. Art is dealing with ourself. I know we are living in a post – Christianity society and nakedness is an issue that I’ve had to talk about it. But if you look at the classical ballet, at the tights the dancers wear, at the floating skirts and at the lifting of the legs… the human body is essential, in a very central way. I mean, we look at crotches and opening legs all the times, so yes, the human body is at the center of my work. Something that is not ever spoken, there is no language in it. Everything that we do has to do with the human body, I’m an admirer of it. I am someone who discovers and seeks beauty in things. I believe that the sensual power of the human body is always welcome, creating the theatrical experience. This question would be answered in the same ways by numerous people, the human body is central in our cultural activities. I’m a traditional painter and in painting there is a huge chapter that is called “nude study”. We learn to paint by painting the nude, it’s a learning process. Because of Christianity, genitals are our taboo, that’s why I’m asked so much about it, because I’ve decided when I was 42 or 43 that this taboo would never exist in my work, in my life. And I think it works fine on stage.

People, places, things… What have you imprinted in your memory about the moment in which your latest work, “Transverse Orientation”, was conceived and born?
I usually have something in my mind but I do not have the shape of it. The long time of the creation of the work it usually starts without knowing at all what I’m going to do. After everything has taken shape I lose the memory of what is going on my mind. I know that it doesn’t exist in a conscious place of my mind before I do it. I am looking for what I am looking for. I don’t know what I am chasing. It’s like having my head in water trying to see whatever there is, to catch it. This is the process of how I usually work. For Transverse Orientation I had a feeling that I was watching and thinking about how the monuments of the patriarchy, the old-fashioned men are being torn down in the western society of today. So, I’ve had an image of a dying bull. The beauty of the bull inspired me so much until I reached the point when I sensed that it had to die. It was like I was killing my father and at the same time I felt an enormous tenderness for that monster that I was assasinating. Everything had a meaning, it brought me here to become the hero, someone that I wanted to go to the opposite of. I felt this kind of atmosphere even because we are living in a moment in which we are discovering that it is time for an idea of equality. That it’s time to get rid of many social taboos. Once we discovered that we wanted to break through those walls, we didn’t stop to analyze how much value, charm and usefulness those restrictions or barriers have had so far to organize human society.
So, we can reach a level and a point that we can consciously say that we don’t need this kind of aggression, of this kind of rules because we can elevate, from now on. The line that exists throughout the show is that of Theseus killing the Minotaur, a beast that must be tamed by killing it, perhaps. Tthere is also a movement from masculine to feminine. It starts with a male world and it ends in a female landscape, like a total energy. I am not talking about norms or social constructions, I’m talking about elemental energies. 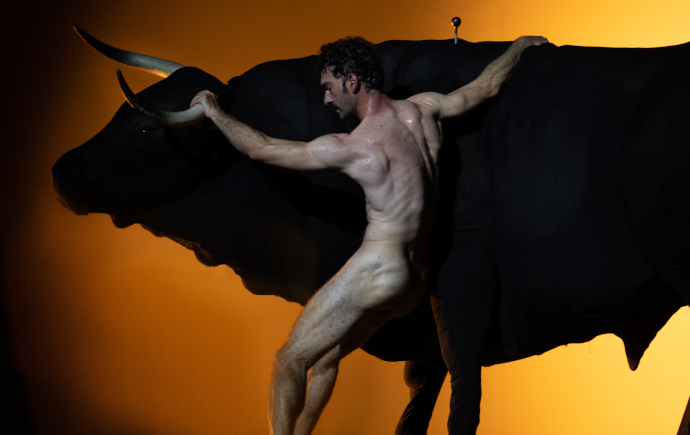 Is there a connection between Ink’s father-son relationship and the killing the Minotaur-father in “Transverse Orientation”?
Yes, because one work was nested in the other. The fact that it happened changed the level of direction. By losing your father, you become the next one, someone that others see as a father, someone who has to be surpassed. The idea of succession has always been on my mind. As well as the relationship with my ancestors, my spiritual ancestors, teachers and people I have admired. How I acknowledge and I’m grateful for them, how I have tried to learn from their compositions it’s something evident in my work. So yes, this has always been on my mind but especially in recent years. There is something in the air about killing the old. And this is inevitable too.

Since it made its debut at the Biennial of Dance in Lyon until now, what have been the transformations and evolutions of “Transverse Orientation”?
It became shorter, it’s getting fit. It’s like when you don’t lose weight but your body is organizing the muscles better. The show is getting fitter we are constantly changing, adding something, but we didn’t eliminate anything. We change the attitude towards it and I think it’s on the way to find itself. I think that the definitive, characteristic change is internal and external to the sense of rhythm.

Feeling like a loser, getting lost, loosing someone or something…do you think that loss is the key concept of our time regardless of the pandemic?
I don’t know if loss is about our times, i think losing is inevitable and quite useful. Winning is like when you look at mountains at the horizon. You want to go there, to the edge, and when you get there you see further mountains. Losing and failing are probably the way how we learn and evolve. So we learn how to tame our natural egoism into human maturity.

Classic Movie Hub @ClassicMovieHub    [Retweeted by robertatorre @robertatorre3]
He chose you, honey! From all the women in the world to be the mother of his only living son! -Ruth Gordon as Minni… twitter.com/i/web/status/1…